6 Tips for Motorcycling Around Australia

Australia is beautiful from whichever angle you look at it, but probably the best angle is from your motorcycle seat. If you’re planning to travel around the Land Down Under, here is a little guide on the gear and the knowledge you should bring with you.

Bumpy or smooth ride?
Most of the surfaced roads in Australia are in pretty good shape and you can visit the majority of the most famous tourist sites without ever going off-road. But, if you’re a serious adventurer, you will want to see some of the less-ridden routes. The condition of unsealed roads varies and if you’re not sure what to expect, better ask the locals or the police. Many of those dirt roads will probably require a dual-sport bike though. The wet season in the north can make many roads practically impassable, but at other times, they range from smooth and firm gravel to very soft and corrugated.

Warning: Dangerous insects!
Flies and mosquitoes can be incredibly aggravating in some areas during certain times of the year, so it’s worth investing in a hat with an insect net, and a good repellent is a must! Even if it seems impossible for flies and mosquitoes to live in certain places, they will usually surprise you, so don’t forget to put on insect repellent every time you stop for a longer period of time.


Warning: Dangerous animals!
Australia is notorious for its venomous snakes and spiders, angry crocs, sharks and super-deadly jellyfish. Even though the possibility exists that you’ll come eye-to-eye with an animal that can kill you, the chances are actually quite slim. Still, there are some sensible rules you should follow. Never walk barefoot in the bush and don’t rummage or sit on piles of sticks or stones, because these are snakes’ favourite places.  Also, don’t leave your shoes and clothes outside your tent as roaming spiders and snakes might see them as a perfect place to take a nap. Always keep the mosquito net on your tent zipped up, and carefully pick the spot for your camp. And even though kangaroos, camels, wombats and emus are not exactly dangerous, if you hit one, both you and the animal can get seriously hurt.

Warning: Dangerous police
Just kidding, the police in Australia are super nice, just like the rest of the Aussies, but they are quite rigorous when it comes to speeding. If you go just 2-3 kph above the speed limit, you’ll be in for a fine. And if you’re drinking, leave your bike at your camp or motel (that goes without saying).


Riding fashion
Australia’s weather can be quite extreme, ranging from very hot to very cold and wet, so you’ll want to come prepared. A good armoured jacket and a pair of nice biking gloves are a must. Leather trousers are also a good idea, especially if you choose to spend more time in the capricious climate of southern Australia. If you choose to go up in altitude, warm underclothes are essential. Always come prepared, because touring Australia when you’re cold and wet is not only a bummer, but you’re more likely to make a mistake and have an accident. 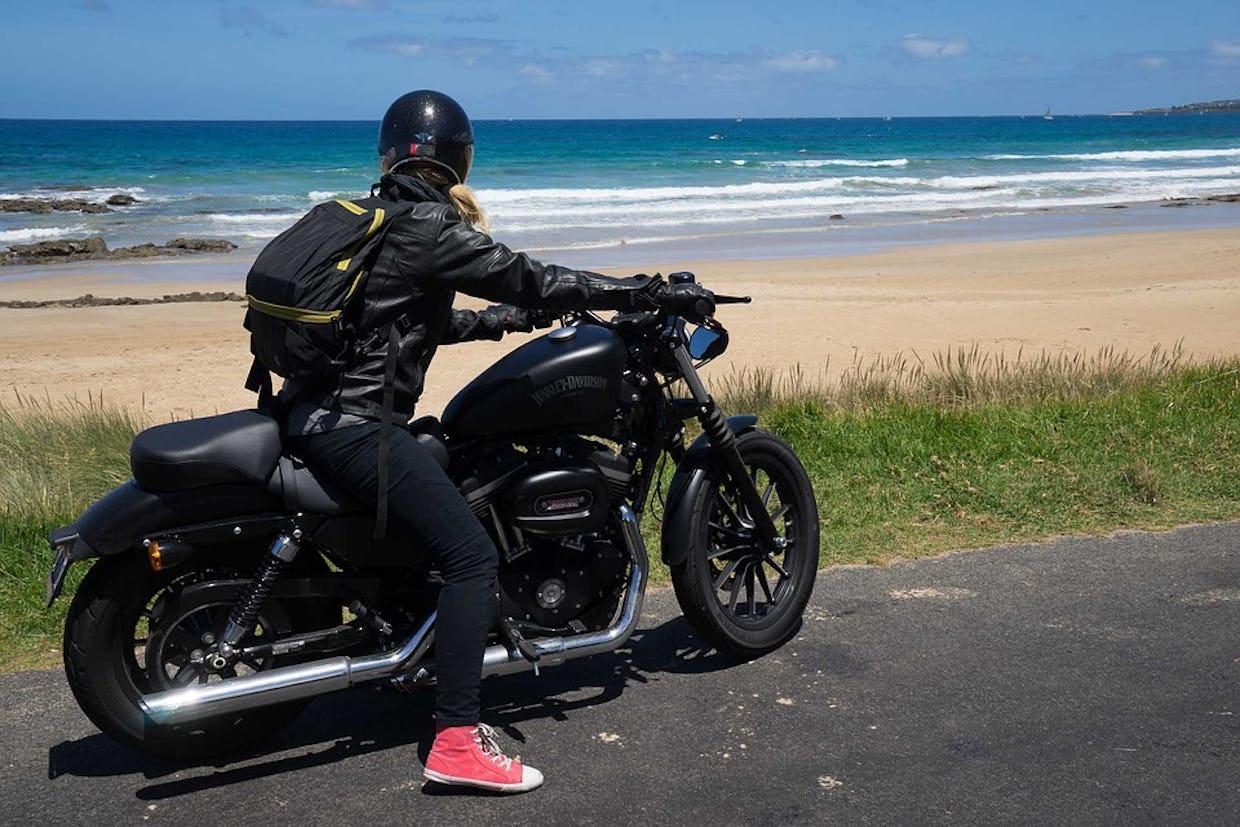 Bare necessities
If you decide to take some remote Outback tracks make sure to bring a lot of water, some food and extra petrol. You’ll also need a tent and maybe a folding chair. There are other motorcycle accessories that always come in handy such as a bike cover, elastic straps, a tire repair kit and gauge. If you’re missing some of those, you could get in serious trouble if you get lost or have a mechanical failure.

Australia might seem scary now, but it’s a beautiful country with amazing sights, flora and fauna and even more amazing people. So, don’t hesitate! Grab your bike and head to the Land Down Under!